Dato’ Iskandar Mizal Mahmood was appointed to the Board of NSTP on 1 June 2020 as an Executive Director.

Dato’ Iskandar has over 30 years of experience with several companies ranging from multinationals to government-linked companies, spanning from investment banking to the technology sector. He will bring this experience to assist the Group in its transformation and turnaround initiatives.

He currently serves on the boards of Theta Edge Berhad and Globetronics Technology Berhad. From April 2017 to January 2019, he served as the Group Chief Executive Officer (“CEO”) and a board member of Granatum Ventures Sdn Bhd, the holding company of Khazanah Nasional Berhad’s creative and media sector, with a portfolio of operations including Iskandar Malaysia Studios, content creation and content financing/investment. He played a key role in turning around the company and bringing international content production companies into Iskandar Malaysia Studios in 2018. He was one of the key figures in the production of Paskal The Movie, one of Malaysia’s highest grossing box office movies, where he was an Executive Producer.

Dato’ Iskandar was also a Member of the Lembaga Tabung Haji Investment Panel from 2016 to 2018. He served as the Managing Partner and Director of Ethos Consulting Sdn Bhd, a consulting firm that specialises in strategy, value creation and investment advisory. He was formerly the Group CEO of Pos Malaysia Berhad, and Group Director of DRB-HICOM Berhad. He served as the Managing Director and CEO of Manipal Education Malaysia Sdn Bhd, founding CEO and a Board member of the Malaysian Biotechnology Corporation Sdn Bhd, and CEO and a Board member of Malaysian Technology Development Corporation Sdn Bhd. Dato’ Iskandar has held several senior management positions and portfolios within Malaysia Airport Holdings, as well as served leading financial institutions including Bumiputra Merchant Bankers Berhad and Commerce International Merchant Bankers Berhad. He began his career with Arthur Andersen & Co in 1989.

Dato’ Iskandar graduated from Boston University, United States of America, with a Bachelor of Science in Business Administration, majoring in Accountancy.

Effective April 1, 2019, he assumes the position of Interim Chief Executive Officer of The New Straits Times Press (Malaysia) Berhad. He also sits on the Boards of Sistem Televisyen Malaysia Berhad.

As Executive Director, Mustapha Kamil will be responsible for the overall operations of Media Prima news and editorial functions. He will provide the strategic direction and oversight of Media Prima Television Networks and NSTP news operations, and will focus on optimising the Group’s news resources in-line with Media Prima’s business transformation efforts.

He began his career as a Cadet Reporter in NSTP in 1989 and held various positions in the Company. In 1994, he attended the Advanced Journalism course, The Thomson Foundation in Cardiff, Wales. In 1994, he was a Reporter at New Straits Times’ (NST) Business Times and later served as NSTP’s Foreign Correspondent in New York, U.S. in 1999. He returned to serve as Business Times’ Managing Editor in 2001. Mustapha Kamil was promoted as NST’s Group Editor in 2013 until his resignation in May 2016.

Before retiring from politics in 1990, Tan Sri Lee served as the State Legislative Assemblyman for Bukit Nenas, Selangor, from 1969 to 1974 and from 1974 to 1990 as the Member of Parliament for Kuala Lumpur Bandar/ Bukit Bintang.

In the private sector, Tan Sri Lee serves as a Non-Executive Director of Amcorp Properties Berhad (AMPROP Berhad) and a Board Member of the Eco World Development Group Berhad (formerly known as Focal Aims Holdings Berhad). Within the Media Prima Group, he is a Board member of Synchrosound Studio.

He holds a Bachelor of Science in Accounting (Major in Finance and Minor in Economics) from Southern Illinois University at Carbondale, Illinois, United States of America. He also holds Certificate of Marine Cargo Technical Claims and Certificate of Liability Insurance. He is a member of the Malaysian Insurance Institute.

Dato’ Seri Subahan had been in the civil service sector since 1994, having served as Private Secretary to the Parliamentary Secretary, Ministry of Finance from 1994 to 1995, Senior Private Secretary to the Deputy Minister of Finance from 1995 to 1999. He commenced his political career in 1996 holding various key positions such as Treasurer for Barisan National Youth Titiwangsa, Federal Territory, Executive Committee Member of Barisan Nasional Youth Malaysia and was the Selangor State Assemblyman for Taman Templer, Selangor from 2008 to 2013. In 2008, he was chosen as the Executive Chairman, Selangor Tourism Action Council and Deputy Head of Barisan Nasional Selayang Division. 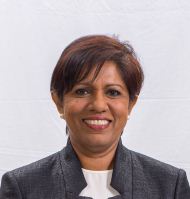 Within the Media Prima Group, she is the Chairman of Media Prima Digital Sdn Bhd. She also currently sits on the Board of Metrod Holdings Berhad and a committee member of Pertubuhan Pelindung dan Penyelamat Kanak-Kanak Selangor dan Kuala Lumpur (Protect and Save the Children Association of Selangor and Kuala Lumpur (P.S. The Children)).

Anne has over 20 years of experience in the Information Technology industry, starting out as a technical Trainer in 1990, moving her way up to be the Managing Director for the Cisco Malaysian operations in 2008, a position she held for three years. Prior to that role, she was the Country Manager for the SAP Malaysian Operations for over two years. Holding leadership positions in two of the largest global technology corporations allowed her to be involved in strategic and significant technology discussions, recommendations and implementations across both government and corporate sectors in Malaysia. Her career track includes positions in Baan Asia Pacific, Oracle Malaysia and MCSB Systems Malaysia.

In the course of her corporate career, she has always been a strong advocate for women’s advancement into leadership positions. In August 2011 she decided to leave corporate world to establish a consulting and training organisation committed to changing perceptions and mindsets on the significance of balanced gender leadership. Hence the establishment of LeadWomen Sdn Bhd in August 2011. As founder and Chief Executive Officer of LeadWomen, Anne plays a pivotal role in guiding the company’s vision and mission towards developing and advancing women into leadership positions across the corporate and government sectors in the ASEAN Region. Currently, she is working on the Malaysian government initiative to drive for at least 30% women representation in decision-making positions and boards of Malaysian public listed companies.